The SafetyPro Podcast
News • Science & Tech • Business
This community is all about safety professionals supporting each other. I wanted to create a space for us to support each other, share our thoughts, ideas, and resources confidentially - with trust and integrity. Join me in the SafetyPro Community TODAY!
Interested? Want to learn more about the community?

The OSHA Vaccine ETS has met a lot of legal pushback. Which legal arguments make sense? Which don't? I talk about all of that in this episode!

The Congressional Review Service (CRS) I mentioned is here: https://crsreports.congress.gov/Home/About

Get the CRS Healthcare Worker ETS Report referenced in this video at this link: https://crsreports.congress.gov/product/pdf/R/R46288

00:37:29
7
View All
2
Reply
Interested? Want to learn more about the community?
What else you may like…
Videos
Podcasts
Posts
Articles

Blaine J. Hoffmann@BlaineJHoffmann
January 25, 2023
Coffee Topic: Made it to Nashville! 🤠

Happy Wednesday! There was no coffee topic yesterday, as I began my day of sitting in airplanes again. It seems like each time I fly, there is something that goes wrong. Just me? 👇

Happy Monday! Here is a hypothetical for you. What do you think?👇

Happy Friday! What do you think about a Safety Management lecture series on the premium side of the community?🤔 Be sure to drop your weekly successes and weekend plans, as well!👇

In this episode of Dirty Steel-Toe Boots, host Phillip B. Russell has an enlightening conversation with Lori Baggett, an in-house corporate counsel with responsibility for legal issues related to workplace safety and health and Occupational Safety and Health Administration (OSHA).

Lori discusses how her experience as a former outside counsel helps her add value to her role as vice president and assistant general counsel. She offers practical tips for in-house counsels responsible for OSHA matters, including those with limited experience in this area.

Lori also shares some tips for in-house safety professionals on best working with their legal departments to improve safety and manage liability. Phillip and Lori have a candid and insightful discussion about diversity, equity, and inclusion in the legal profession.

A comprehensive public health strategy is needed to protect younger workers, Centers for Disease Control and Prevention researchers say after their recent study showing that the rate of nonfatal on-the-job injuries among 15- to 24-year-olds is between 1.2 and 2.3 times higher than that of the 25-44 age group. Have a listen and join in on the conversation - what has been your experience working with younger workers and safety?👇

Emotional intelligence is what we use when we empathize with our coworkers - it allows us to connect with others, understand ourselves better. It is invaluable for the safety professional to improve emotional intelligence. It is directly linked to performance. We discuss it further in this episode.

PREMIUM MEMBERS: Look for a follow-up post for the EQ Worksheet and more info!

Quiz: Does this control box door need to be closed, or is it ok to leave it open? Provide support for your answer. 👇🏻

UPDATE: To add an additional issue, take a look at this situation in the second picture. Workers could be exposed to a serious electrical event. But what about passengers in the terminal? I was sitting this close, right on the other side of the glass. Look at the other seats; this is a bad design. 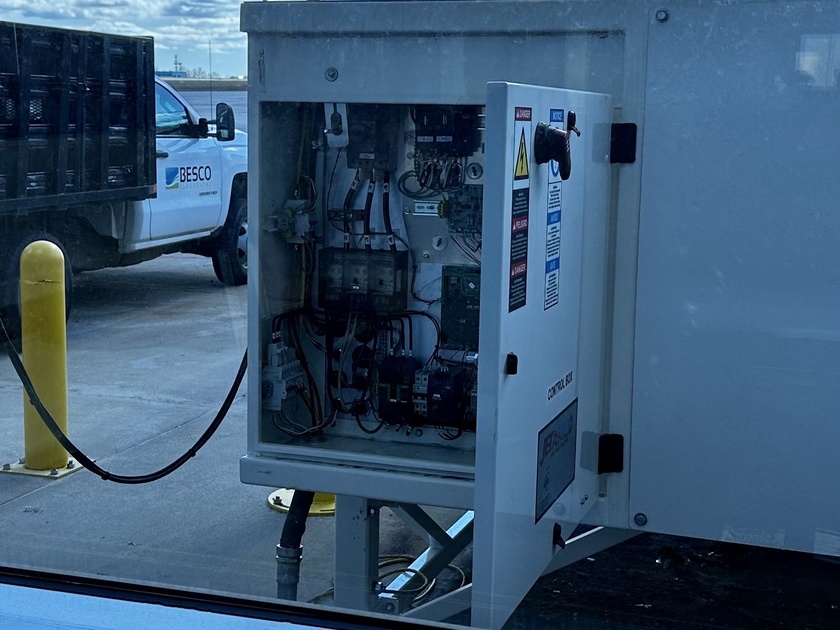 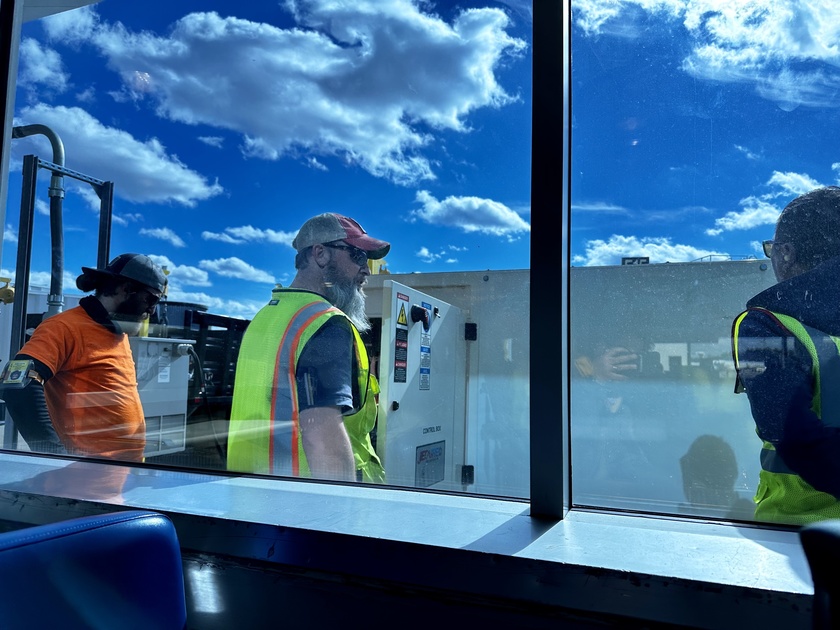 Heading back to OH-IO!!! Not a lot of action here at BNA. Not that I am complaining. It was a productive day yesterday, filming a drowsy/fatigue driving safety video. It was also a lot of fun. Andre @Thesafetyguy and Flora @Om_nom_mama kept me in line and focussed. 😂
🐿️

How is your week going so far? 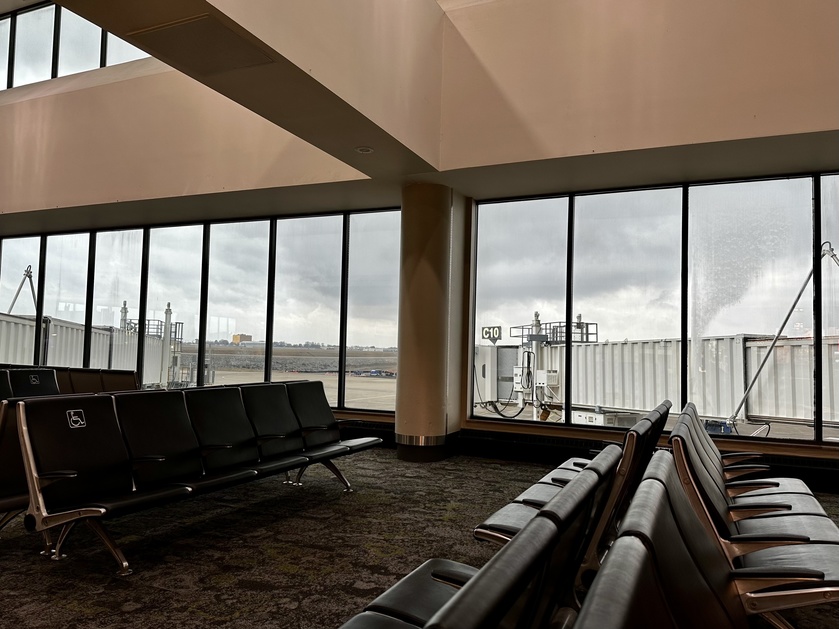 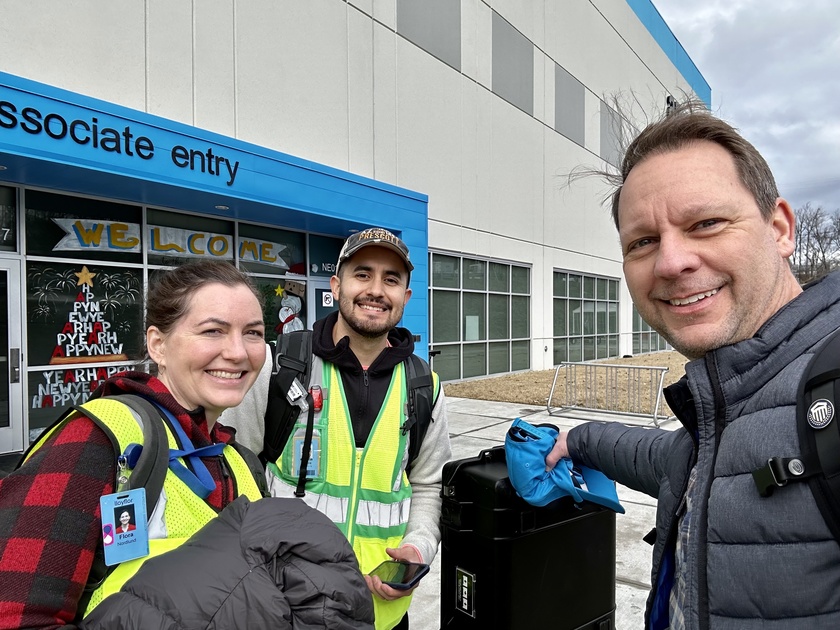 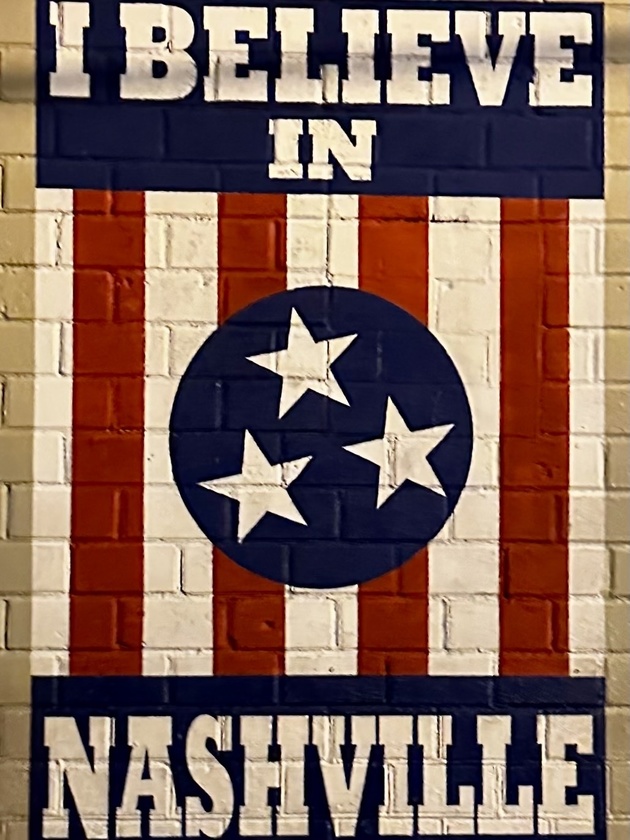 I will be flying the winter midwest skies this morning. I hope the weather is fantastic wherever you may be today. I am leaving a lot of snow behind, and more is on the way. Will see how my return trip looks. ❄️ 🥶
Stay safe out there! 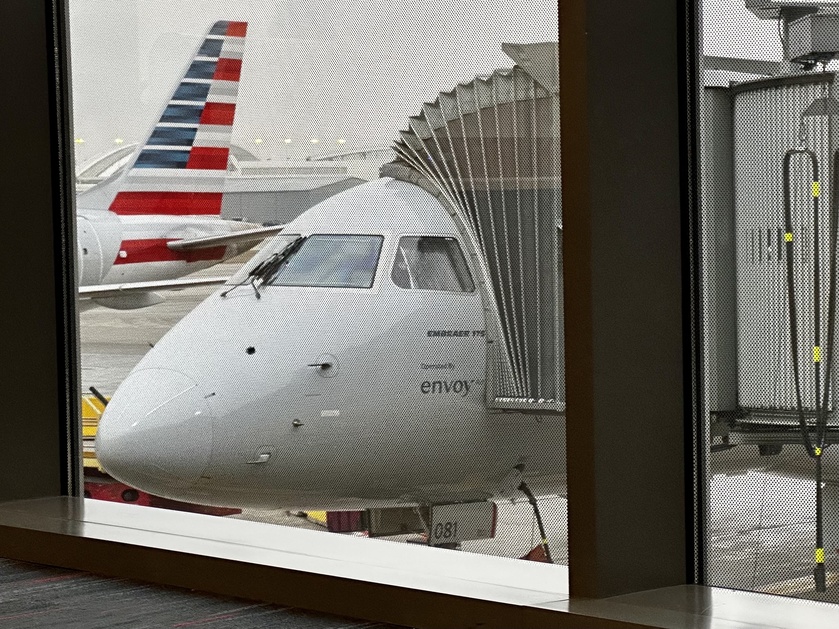 The SafetyPro Community Team@The-SPP-Team
22 hours ago 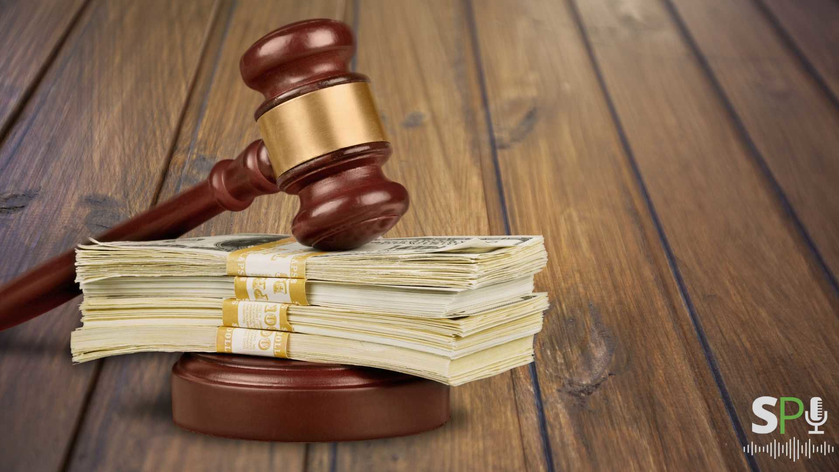 The Occupational Safety and Health Administration (OSHA) issued a press release detailing changes to an existing policy on the instance-by-instance issuance of citations. According to OSHA, this change is "to make [OSHA's] penalties more effective in stopping employers from repeatedly exposing workers to life-threatening hazards or failing to comply with certain workplace safety and health requirements."

According to the press release, the impact of the change will be limited to specific conditions where the rule's language supports a citation for each instance of noncompliance, which include violations such as "lockout/tagout, machine guarding, permit-required confined space, respiratory protection, falls, trenching and for cases with other-than-serious violations specific to recordkeeping." According to John Surma of Ogletree Deakins, "...related enforcement memoranda suggest this is not how the practice is expected to be utilized."

Since 1990, the practice of issuing citations on an "instance-by-instance" basis (IBI citations) has been limited to "egregious willful citations." OSHA Instruction CPL 02-00-080, published on October 21, 1990, states that "[t]he large proposed penalties that accompany violation-by-violation citations are not, therefore, primarily punitive nor exclusively directed at individual sites or workplaces; they serve a public policy purpose; namely, to increase the impact of OSHA's limited enforcement resources."

It is important to point out that the instance-by-instance citation policy was rarely used. As John Surma of Ogletree Deakins notes, "When it was used, it was often limited to cases involving serious injury or death where prior serious injury- or death-related inspections were conducted and citations issued. Even more limiting, OSHA often limited this practice to cases where the citations were fully resolved through settlement or adjudication."

The current announcement was related to an enforcement memorandum that included four factors for determining whether instance-by-instance citations should be issued. The factors to be considered include the following:

In addition to issuing new guidance on when to issue IBI citations, OSHA also issued an enforcement memorandum reminding regional administrators and area directors of their authority not to group violations. The practice of grouping violations typically involves issuing a citation with multiple subparts that carry no penalty but state alternative theories or factual bases to justify the issuance of the citation. Those subparts carry no additional penalty, but they may require abatement of violations beyond the scope of the first listed instance.

That enforcement memorandum set forth the factors that generally are considered when considering when to group citations and then why grouping should not be considered:

Grouping violations should be considered when:

According to John Surma of Ogletree Deakins: "In cases where grouping does not elevate the gravity or classification and resulting penalty, violations should not be grouped if the evidence allows for separate citations.

Thus, whereas the prior guidance concerning IBI citations was limited to inspections where egregious willful citations were issued, this guidance would apply the practice to even the lowest level of citable violation: that which is considered other-than-serious.

In addition to the significant increase in penalties for OSHA citations that recently became effective, employers are much less likely to see citations grouped—with the consequence of significantly increased penalties multiplied by the number of instances cited. It is fair to assume that the number of cases that will be contested, due to the increased overall penalty exposure, will increase dramatically, depending upon how widespread this practice is utilized and the time to resolution of OSHA citations increased." 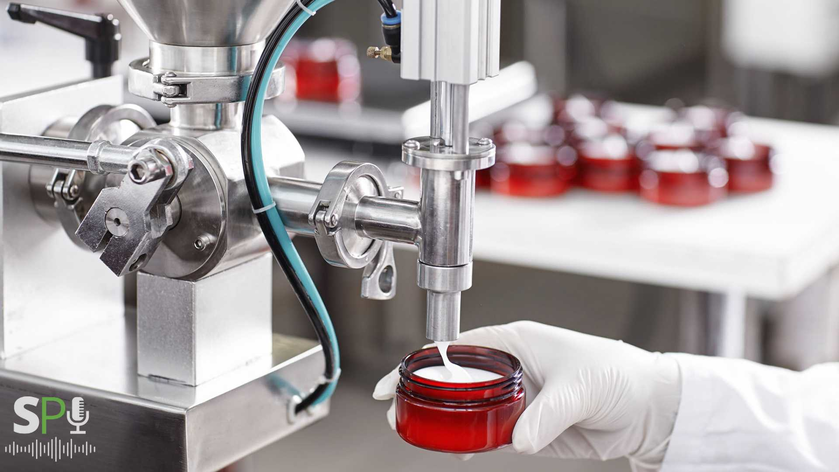 As part of the Consolidated Appropriations Act 2023, the Modernization of Cosmetics Regulation Act of 2022 (“MoCRA”) was signed into law. MoCRA implements new compliance requirements on the cosmetics industry and expands the U.S. Food and Drug Administration’s (“FDA”) authority to oversee and regulate cosmetics.

The following new requirements on “responsible persons” and “facilities” will be imposed by MoCRA:

MoCRA directs FDA to promulgate rules regarding the following three issues. Importantly, the cosmetics industry will have opportunities to provide comments on the proposed rules.

In addition to the above rulemakings, FDA must issue a report within the next three years on the use of per- and polyfluoroalkyl substances (“PFAS”) in cosmetic products. 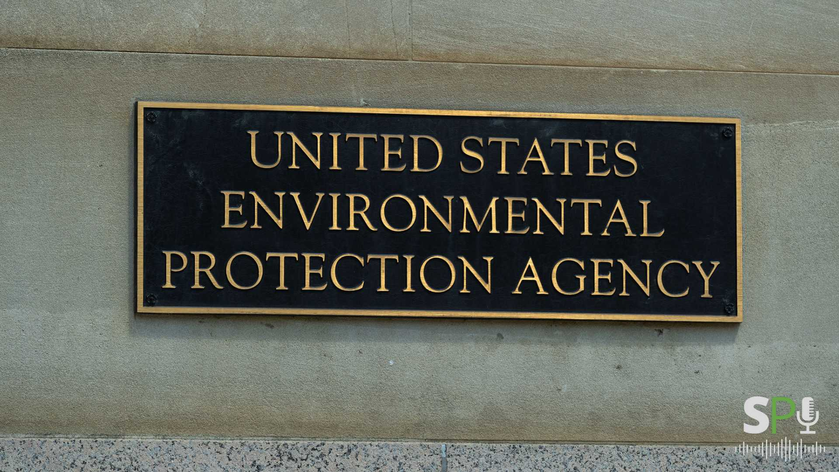 The U.S. Environmental Protection Agency (EPA) announced on January 9, 2023, the availability of the final revision to the risk determination for trichloroethylene (TCE) risk evaluation issued under the Toxic Substances Control Act (TSCA). 88 Fed. Reg. 1222. EPA determined that TCE, as a whole chemical substance, presents an unreasonable risk of injury to human health when evaluated under its conditions of use (COU). EPA states that the revision to the risk determination reflects its announced policy changes to ensure the public is protected from unreasonable chemical risks in a way supported by science and the law.

In its revised risk determination, EPA found that TCE presents an unreasonable risk to the health of workers, occupational non-users (ONU) (workers nearby but not in direct contact with this chemical), consumers, and bystanders. EPA identified risks for adverse human health effects unrelated to cancer, including neurotoxicity and liver effects, from acute and chronic inhalation and dermal exposure to TCE. EPA also identified risks for cancer from chronic inhalation and dermal exposures to TCE.

EPA states that it used the whole chemical risk determination approach for TCE in part because there are benchmark exceedances for multiple COUs spanning across most aspects of TCE’s life cycle, from manufacturing (including import), processing, commercial use, consumer use, and disposal for the health of workers, ONUs, consumers, and bystanders, and because the health effects associated with TCE exposures are “severe and potentially irreversible” (including developmental toxicity, reproductive toxicity, liver toxicity, kidney toxicity, immunotoxicity, neurotoxicity, and cancer).

"This decision should not be viewed as an indication that the EPA believes there is widespread non-compliance with applicable Occupational Safety and Health Administration (OSHA) standards.” - EPA

EPA notes that the revised risk determination for TCE does not reflect an assumption that workers always and appropriately wear personal protective equipment (PPE), even though some facilities might use PPE as one means to reduce workers’ exposure. EPA states that this decision “should not be viewed as an indication that the EPA believes there is widespread non-compliance with applicable Occupational Safety and Health Administration (OSHA) standards.” In fact, according to EPA, it received public comments from industry respondents about occupational safety practices currently in use at their facilities. It will consider these comments and other information on the use of PPE, engineering controls, and different ways the industry protects its workers as potential ways to address unreasonable risk during the risk management process. EPA will consider this information as part of the risk management process.

EPA acknowledges that occupational safety protections could be in place at some workplace locations. Not assuming the use of PPE in its baseline exposure scenarios, however, reflects EPA’s recognition that specific subpopulations of workers exist that may be highly exposed because:

EPA states that as it moves forward with risk management rulemaking for TCE, it will “strive for consistency with existing OSHA requirements or best industry practices when those measures would address the identified unreasonable risk.” EPA will propose occupational safety measures in the risk management process that would meet TSCA’s statutory requirement to eliminate an unreasonable risk of injury to health and the environment.

Powered by Locals
About Community
The SafetyPro Podcast
274 Members

Thanks so much for being a part of this community! I hope we can all collaborate and learn from each other. We have videos in production, live chats, downloads, templates, tools you can use to become a better safety pro! I look forward to sharing our experiences and helping continue to develop the safety professional community 😀

21
View All
4
Reply
Don’t have a Locals account yet? SIGN UP
I’m already a member Log in
Please keep this window open while your file is uploading...